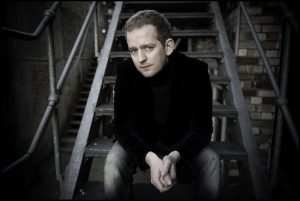 Alasdair Beatson combines a career as one of the UK’s most prominent chamber pianists with work as soloist in an especially varied and adventurous repertoire.

His solo discography includes piano music of Mendelssohn, Ludwig Thuille, and the Opus 1’s of Schumann, Grieg, Berg and Brahms. 2017 will see the release of a recording with BIS dedicated to music for horn and piano, recorded on four historical pianos spanning 1815-1890 with horn player Alec Frank-Gemmill. 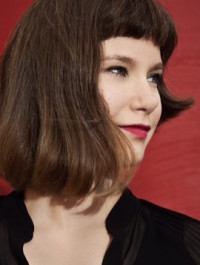 Lilli Maijala gave her first solo performance with the Oulu Symphony Orchestra at the age of 17, and has since appeared regularly as both a concert soloist and a chamber musician on stages around Europe. In recent years she has performed as guest soloist with orchestras including the Helsinki Philharmonic, Lahti Symphony Orchestra, Chamber Orchestra of Lapland, Kuopio Symphony Orchestra, Camerata Salzburg, Folkwang Kammerorchester Essen and Tapiola Sinfonietta. In the spring of 2013 she gave the world premiere of Lauri Kilpiö’s viola concerto with the Jyväskylä Sinfonia.

Maijala studied the viola at the Sibelius Academy, the Hochschule für Musik Detmold and the Edsberg Chamber Music Institute with teachers including Teemu Kupiainen, Diemut Poppen and Lars Anders Tomter. During her studies she received critical acclaim at numerous international competitions, including the Nordic Viola Competition, Tokyo International Viola Competition and the ARD Competition Munich.

Lilli Maijala was a member of the fearless quartet-lab (with cellist Pieter Wispelwey and violinists Patricia Kopatchinskaja and Pekka Kuusisto) and is now dividing her time between international chamber music venues and her teaching post at the Sibelius Academy. She also performs on baroque viola. The highlights of 2016 include the Nordic premiere of the Peteris Vasks viola concerto with the Ostrobothnian Chamber Orchestra and Juha Kangas as well as chamber music festivals of Resonances, Peasmarsh, West Cork Music and Schiermonnikoog. Lilli Maijala plays an instrument by Jean-Baptiste Vuillaume from 1870, on loan by kind permission of the Finnish Cultural Foundation. 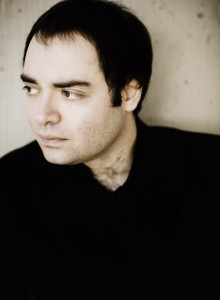 Alexander Melnikov graduated from the Moscow Conservatory under Lev Naumov. He was awarded important prizes at eminent competitions such as the International Robert Schumann Competition in Zwickau (1989) and the Concours Musical Reine Elisabeth in Brussels (1991).

Together with Andreas Staier, Alexander Melnikov developed a programme that sets excerpts from Bach’s Well-Tempered Clavier (Andreas Staier – harpsichord) in musical dialogue with Shostakovich’s 24 Preludes and Fugues (Alexander Melnikov – piano). His recording of the latter piece was awarded the BBC Music Magazine Award and named as one of the “50 Greatest Recordings of All Time”. Additionally, his discography features works by Beethoven, Brahms, Rachmaninov, Schumann, Schubert, Shostakovich and Scriabin.

The 2015/16 season sees the launch of “The Man with the Many Pianos” programme, in which Alexander Melnikov performs a solo recital on three different instruments reflecting the periods in which the works were written, as well as a three-concert Shostakovich programme with the Cuarteto Casals. Further highlights include concerts with the Camerata Salzburg and Louis Langrée at the Mozartwoche in Salzburg, Seattle Symphony Orchestra, as well as engagements in London’s Wigmore Hall, Amsterdam’s Muziekgebouw aan’t Ij and Barcelona’s Palau de la Música Catalana. 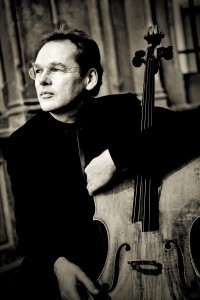 Christoph Richter, born in Bonn, Germany, is one of the most sought-after musicians in Europe and regularly performs with artists such as András Schiff, Isabelle Faust, Heinz Holliger.

Richter was formerly cellist in the Cherubini String Quartet, and performed as a member of the ensemble in all of the world’s most prestigious concert halls. He performed the complete works for cello of Brahms and Webern (2008), Beethoven (2009+2015), and Bach (2013) in London. After his studies with André Navarra and Pierre Fournier he won prizes at international competitions, and is much in demand as a soloist with leading orchestras.

He has been principal cellist of the Cappella Andrea Barca since its founding by music director András Schiff in 1999, and is a key participant in the renowned International Musicians Seminar, Prussia Cove, in Cornwall, U.K. Other international festivals in which he is a regular participant include those of Ittingen, Marlboro, and Salzburg.

His strong interest in contemporary music has led him to work with composers such as Penderecki, Kurtág, Henze, Lachenmann, Holliger, Reimann and Widmann. Amongst his recordings are works by Schumann and Holliger for ECM, concertos by Klengel for cpo, the Divertimento KV 563 by Mozart for Naxos and the Brahms Sextet op.36 for Harmonia Mundi, which received the Diapason D’Or.

Mr. Richter is highly respected throughout Europe and the UK as a master teacher. He is professor of cello at the Folkwang University in Essen (Germany) and the Royal Academy of Music in London, and teaches chamber music at the European Chamber Music Academy and ChamberStudio (London). 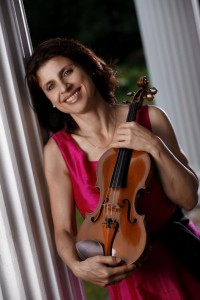 Violinist Carmit Zori came to the United States from her native Israel at the age of fifteen to study with Ivan Galamian, Jaime Laredo and Arnold Steinhardt at the Curtis Institute of Music in Philadelphia. Ms. Zori is the recipient of a Levintritt Foundation Award, a Pro Musicis International Award, and the top prize in the Walter W. Naumburg International Violin Competition.

Carmit Zori has appeared as a soloist with the New York Philharmonic, the Rochester Philharmonic, and the Philadelphia Orchestra, among many others, and has given solo recitals at Lincoln Center, the Los Angeles County Museum of Art, the Isabella Stewart Gardener Museum in Boston, the Phillips Collection in Washington D.C., the Tel Aviv Museum and the Jerusalem Center for the Performing Arts. She has performed throughout Latin America and Europe, as well as in Israel, Japan, Taiwan and Australia, where she premiered the Violin Concerto by Marc Neikrug.

Ms. Zori, who for ten years was an artistic director at Bargemusic, founded the Brooklyn Chamber Music Society in 2002. She has recorded on the Arabesque, Koch International, and Elektra-Nonesuch labels. Ms. Zori is professor of violin at Rutgers University and at SUNY Purchase, where she also serves on the chamber music faculty. 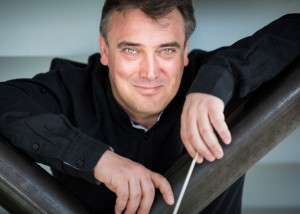 Jaime Martín has risen quickly to international acclaim as a conductor in recent years, following his prominent career as a flautist. Having taken up the role of Artistic Director and Principal Conductor of Gävle Symphony Orchestra in September 2013, he is also Chief Conductor of the Orquestra de Cadaqués and Artistic Director of the Santander International Festival.

As a guest conductor he works regularly with the London Philharmonic, Orquestra Sinfònica de Barcelona, Royal Scottish National Orchestra, Swedish Radio Symphony, London Mozart Players, Academy of St Martín in the Fields and Ulster Orchestra. Jaime Martín made his operatic debut conducting Magic Flute at El Escorial Madrid and San Sebastian Festival in August 2012. He made his debut at the English National Opera in February 2013 conducting Barber of Seville and returned in autumn 2014 to conduct Marriage of Figaro.

Born in Santander, Spain, Jaime Martín studied with Antonio Arias in Madrid and later with Paul Verhey in The Hague, Holland. Jaime has an extensive discography both as a conductor and soloists for Sony and EMI and on the Tritó label.

Founded by Harry Blech in 1949 as the UK’s first chamber orchestra, the London Mozart Players (LMP) has achieved international renown for its outstanding live performances and CD recordings of the core Classical repertoire. Music Directors have included Gérard Korsten, Andrew Parrott, Matthias Bamert and Jane Glover, who grew and developed the orchestras strong Classical tradition. The LMP enjoys connections with Hilary Davan Wetton as Associate Conductor, and Howard Shelley as Conductor Laureate, and continues to work closely with many of the world’s finest conductors and soloists. In 2015 the LMP appointed cellist Laura van der Heijden as its first Young Artist in Residence.

The LMP has been committed to providing a platform for sharing the creative arts with schools and communities for over 25 years. LMP Voyager is an education and community hub which allows music to inspire, educate & enrich communities through an extensive programme of work across the UK.

The LMP enjoys the patronage of HRH The Earl of Wessex. In June 2014 the LMP began a new and exciting phase in its history, becoming the first chamber orchestra in the UK to be managed both operationally and artistically by the players. 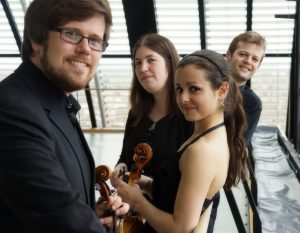 Winner of the First Prize at the 2015 Lyon International Chamber Music Competition, the Castalian String Quartet is fast becoming a favourite with audiences in the United Kingdom and abroad for its ‘richly romantic energy and passion’ (Strad Magazine).

Formed in 2011, the quartet has been the beneficiary of awards from the Royal Overseas League (2011 Elias Fawcett Trust Award), the Countess of Munster Trust, the Tunnell Trust, the Royal Philharmonic Society, and Mozarteum de France. In 2013 it won both the Audience Prize and First Prize in the Kammermusik Hannover Next Generation Competition, broadcast on German radio station NDR.

Engagements in 2016/17 include recitals at the Wigmore Hall, Jubilee Hall Aldeburgh, and the Frankfurt Quartetaffairs, Hitzacker and Conques Festivals, and a CD for Meridian Records. Highlights from previous seasons include performances at the Wigmore Hall, the Purcell Room, Kings Place, the Edinburgh Festival and a BBC Radio 3 recital from the Cheltenham Festival. 2013 saw its German recital debut in the Heidelberger Frühling String Quartet Festival and first concerts in Switzerland at the Ceresio Estate Festival, Lugano.

2014 brought the release of the quartet’s recording of Mendelssohn on the Champs Hill label (awarded BBC Music Magazine’s ‘Critic’s Choice’ for September, and ‘Chamber Music Disc of the Quarter’ by the German Record Critics Association), a second tour of Scotland, and recitals in Berlin and the Festival de Musique de Conques.

In 2014 they graduated from the Hannover University of Music, Dance and Theatre with a Masters Degree in Chamber Music, studying with their mentor Oliver Wille. The quartet has also worked closely with Thomas Brandis and Levon Chilingirian.