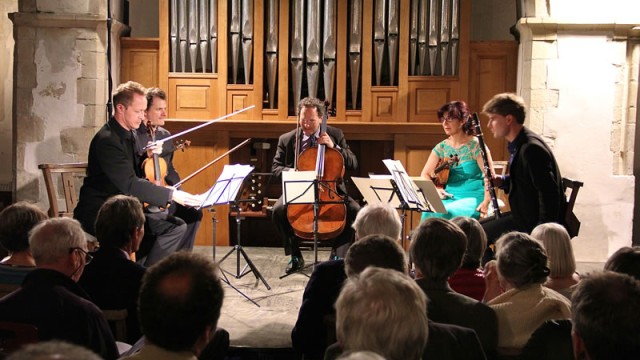 The following article by Seana Lanigan appeared in the Rye News on 7th May 2015.

The Peasmarsh Chamber Music Festival has just unveiled its 2015 programme and top tickets for some of the events are already sold out. The festival brings leading international musicians to local venues, with seven concerts over four days. The opening concert takes place on June 25 at St Peter and St Paul, Peasmarsh and features performers including Anthony Marwood (violin), Richard Lester (cello) and Simone van der Giessen (violin) amongst others. The concert has a Bohemian flavour featuring works by Janáček and Dvořák. A piano trio by renowned British composer Huw Watkins is also featured.

The Rye concert takes place at St Mary’s in Rye on June 26 and features Marwood and Lester as soloists as well as the London Mozart Players, one of the most well-known and loved ensembles in British classical music. Watkins’ Three Welsh Songs for Strings opens the evening and the programme will also include Schumann’s Concerto for Cello in A Minor and Beethoven’s 4th Symphony in B Flat Major. Jaime Martin will conduct.

New educational and participatory events are planned this year, including some in Rye. Watch this space for further details. In the meantime, see the programme for the festival which runs June 25-28 and buy tickets here.