Our Artistic Directors Anthony Marwood and Richard Lester have invited brilliant musicians to join them for this year’s festival.

We are delighted to announce that the Doric String Quartet will be returning as our guest ensemble and the Britten Sinfonia will join us for the orchestral concert in Rye. 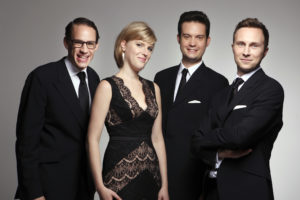 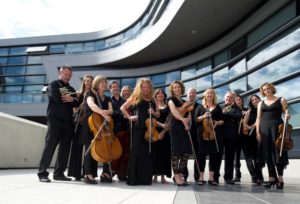 We look forward to sharing more details about the other 2017 guest artists in the coming months.

The Doric String Quartet has firmly established itself as the leading British string quartet of its generation, receiving enthusiastic responses from audiences and critics across the globe. Selected for representation by YCAT in 2006, the Quartet went on to win several prizes including 1st prize at the 2008 Osaka International Chamber Music Competition in Japan, 2nd prize at the Premio Paolo Borciani International String Quartet Competition in Italy and the Ensemble Prize at the Festspiele Mecklenburg-Vorpommern in Germany.

Another recent highlight has seen the Quartet take on John Adams’ “Absolute Jest” for String Quartet and Orchestra. The Doric have now performed the piece with the Vienna Symphony at the Vienna Konzerthaus with John Adams conducting, with the Netherlands Radio Philharmonic at the Concertgebouw and with the BBC Scottish Symphony Orchestra conducted by Markus Stenz.

Highlights of the 2015/16 season include five performances at the Wigmore Hall, as well as return appearances at the Berlin Konzerthaus and Amsterdam Concertgebouw. In April the Quartet returns to North America for its annual tour, this time including performances in Salt Lake City, Philadelphia, Boston and Vancouver. European recital engagements include appearances in Aalborg, Aarhus, Clermont-Ferrand, den Bosch, Ferrara,,Haarlem and Perugia. They will also tour with Elisabeth Leonskaja, including performances at the Musikverein in Vienna and at Wigmore Hall. Festival engagements take the quartet to the Cheltenham, Poznan, Risør and Storioni Chamber Music Festivals, as well as appearances at the Oxford Lieder, Two Moors and North Norfolk Music Festivals.

Britten Sinfonia is one of the world’s most celebrated and pioneering ensembles. The orchestra is acclaimed for its virtuoso musicianship, an inspired approach to concert programming which makes bold, intelligent connections across 400 years of repertoire, and a versatility that is second to none. Britten Sinfonia breaks the mould by not having a principal conductor or director, instead choosing to collaborate with a range of the finest international guest artists from across the musical spectrum, resulting in performances of rare insight and energy.

Britten Sinfonia is an Associate Ensemble at the Barbican in London, has residencies across the east of England in Norwich, Cambridge (where it is an Ensemble-in-Residence at the University) and Saffron Walden, where the orchestra becomes Resident Orchestra at Saffron Hall in Autumn 2016. The orchestra also performs a chamber music series at Wigmore Hall and appears regularly at major UK festivals including the Aldeburgh Festival and BBC Proms. The orchestra’s growing international profile includes regular touring to North and South America and Europe. The orchestra made its debut in China in May 2016 with a three-concert residency in Shanghai, as well as performances in Beijing and Wuhan.

Founded in 1992, the orchestra is inspired by the ethos of Benjamin Britten through world-class performances, illuminating and distinctive programmes where old meets new, and a deep commitment to bringing outstanding music to both the world’s finest concert halls and the local community. Britten Sinfonia is a BBC Radio 3 broadcast partner and regularly records for Harmonia Mundi and Hyperion.

Central to Britten Sinfonia’s artistic programmes is a wide range of creative learning projects both within schools and the community. Britten Sinfonia Academy is a dynamic chamber orchestra for talented secondary school-aged musicians from the east of England. Mirroring the adventurous programming and musical excellence of Britten Sinfonia, the Academy works without a conductor, playing side-by-side Britten Sinfonia musicians who nurture and challenge our members, developing their musical and leadership skills. We also hold an annual composition competition, OPUS, offering unpublished composers the chance to receive a professional commission.