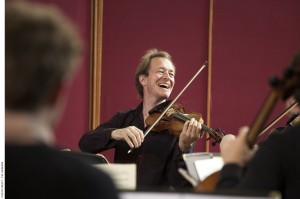 Anthony Marwood enjoys a wide-ranging international career as soloist, director and  chamber musician, and has established relationships with orchestras and festivals throughout the  world.

Highlights in 2021 included his debut at the Tanglewood Festival in the USA, playing Ligeti’s violin  concerto, conducted by Thomas Adès. In the next 18 months he will return to the Scottish  Chamber Orchestra, BBC National Orchestra of Wales, National Orchestra of Spain, Norwegian  Chamber Orchestra, Trondheim Soloists, Les Violons du Roy in Canada and the Adelaide  Symphony, as well as performing at the Yellow Barn, Portland and Bridgehampton Festivals in the  USA, and Ilumina Festival in Brazil. In November 2023 he will be the curator of UKARIA 24, a  special long weekend festival at a beautiful new concert hall in the Adelaide Hills.

Many leading composers have written concertos for him, including Thomas Adès, Steven Mackey,  Sally Beamish and Samuel Carl Adams.

Anthony is a prolific recording artist, and has recorded 50 CDs for the Hyperion label, alongside  many recordings for other labels. His next project is to record Elgar’s violin concerto.

He was the violinist of the Florestan Trio for sixteen years and won the Royal Philharmonic Society  Instrumentalist Award in 2006.

This April he taught violin masterclasses at the International Musicians’ Seminar at Prussia Cove,  Cornwall.

Anthony was awarded an MBE in the Queen’s 2018 New Year Honours list. He plays a 1736 Carlo  Bergonzi violin, kindly bought by a syndicate of purchasers, a 2018 violin by Christian Bayon, and  a bow by Joseph René LaFleur. 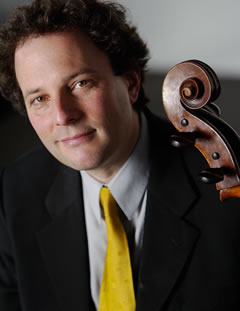 He has performed as concerto soloist with, among others, Chamber Orchestra of Europe, Orchestra of the Age of Enlightenment, Camerata Salzburg, BBC Scottish SO, Scottish Chamber Orchestra and the Ulster Orchestra, under conductors including Claudio Abbado, Nikolaus Harnoncourt, Sandor Vegh, Myung Whun Chung and Sir Roger Norrington. He has also appeared as director and soloist with COE, OAE, Academy of St Martin in the Fields, Britten Sinfonia, Aurora and, in Montreal and Quebec, with Les Violons du Roy.

He has made over forty discs of chamber music, including the complete works of Mendelssohn for cello and piano, and a disc of Boccherini sonatas on period instruments.

Richard teaches at the Royal College of Music and the Guildhall School in London. He gives masterclasses worldwide, and is a frequent guest teacher in Canada at the Banff Center and at Domaine Forget.

When not performing or teaching, Richard is happiest cooking, eating and drinking, preferably on a boat.

The Festival is managed by Anna Rowe, Festival Manager and Hal Hutchison, Concerts Manager, with considerable voluntary support from Sue Schlesinger, who manages the Festival Box Office, the Friends of Peasmarsh Church and Fiona Mortimore, the Friends Administrator.

The Festival is also particularly grateful to the Vicars, Churchwardens and members of the respective Parochial Church Councils of the Church of St Peter and St Paul in Peasmarsh and St Mary the Virgin Church in Rye, the festival’s two principal venues.

All festival management enquiries should be directed to Anna Rowe at anna@peasmarshfestival.co.uk