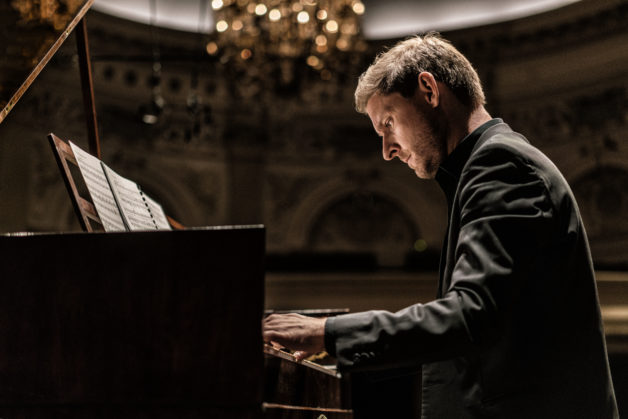 Kristian Bezuidenhout is one of today’s most notable and exciting keyboard artists, equally at home on the fortepiano, harpsichord, and modern piano.

Kristian is an Artistic Director of the Freiburger Barockorchester and Principal Guest Director with the English Concert. He is a regular guest with the world’s leading ensembles including Orchestre des Champs Elysées, Koninklijk Concertgebouworkest, Chicago Symphony Orchestra and the Leipzig Gewandhausorchester; and guest-directs from the keyboard with many other ensembles.

In the 2018/19 season, Kristian play-directs programmes with Scottish Chamber Orchestra and  Irish Baroque Orchestra as well as Freiburger Barockorchester and English Concert. As a soloist he performs with Cleveland Orchestra, London Symphony Orchestra and Deutsches-Sinfonie Orchester Berlin. Solo recitals and chamber music take him around Europe and to the US and Canada.

Kristian’s rich and award-winning discography is available on Harmonia Mundi.

Derek Gripper is a classical guitarist who has taken a unique path. As a South African classical musician he found limited by the music of the traditional classical guitar and so went on a journey through different musical styles, returning always to the guitar to find ways of bringing what he learned onto the instrument.

His studies took him to India where he learned the rudiments of the Carnatic percussion language, and then to the farms of the Western Cape where he created an “avant-ghoema” string quartet language (Sagtevlei 2001) with South African composer and trumpeter Alex van Heerden. He then began to explore the limits of the classical guitar’s sonority, first on eight string guitar evocations of Cape Town folk music (Blomdoorns 2003), then in compositions on a guitar by legendary luthier Hermann Hauser (Ayo 2008, Kai Kai 2009) and then in transcriptions by Brazilian composer Egberto Gismonti (The Sound of Water 2012) whose solo guitar works are an explosive rewriting of classical guitar, world music, jazz and contemporary classical. The album combines Gismonti’s music with Derek’s own compositions.

In 2012 he completed a ten year project to understand and translate the music of the West African kora (21 string harp) virtuoso Toumani Diabate to solo guitar, resulting in two critically acclaimed albums, One Night on Earth (Songlines Top of the World) and Libraries on Fire, the latter receiving a Songlines award for “Best Album Africa and Middle East” in 2017. The recognition from these albums resulted in concert tours the world over, performances at venues such as Carnegie Hall, and collaborations with classical guitar legend John Williams, Indian guitar master Debashish Battacharya, and West African Musicians such as Trio da Kali and Toumani Diabate himself.

In 2017 Derek returned to the studio and to his musical roots to record an album of the solo violin works of Bach, arranged on solo guitar and delivered with the phraseology and fire of a musician who has steeped himself in musics outside of the classical canon. That album is due for release in 2018. 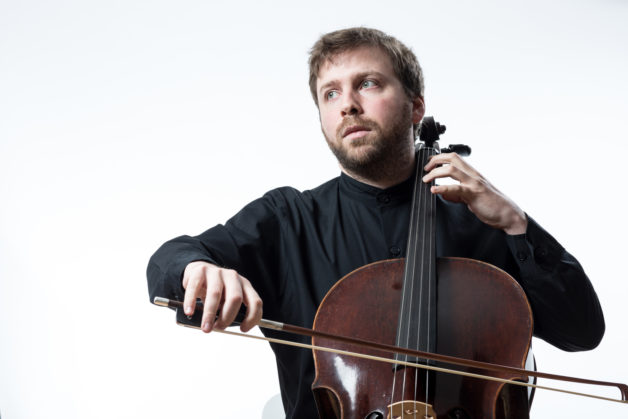 American cellist Bartholomew LaFollette has a rich and varied career as an international soloist and chamber musician.

After being launched by YCAT (Young Classical Artists Trust) with numerous performances at the Wigmore Hall, Barbican Centre, Bridgewater Hall and the Royal Festival Hall, Bartholomew went on to win first prize at The Arts Club’s and Decca Records’ inaugural Classical Music Award.

Last year he released an acclaimed Brahms disc with pianist Caroline Palmer. Gramophone Magazine praised it for its “technical finesse and interpretative insight” and The Strad wrote, “The opening of the F major Sonata soars inspiringly… The dolce at the end of the Adagio is heart-wrenching.”

In 2011, at the age of 26, Bartholomew was appointed Principal Cello Teacher at the Yehudi Menuhin School. 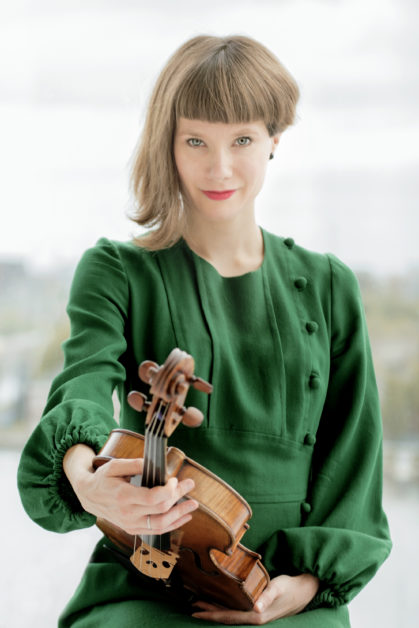 Lilli Maijala gave her first solo performance with the Oulu Symphony Orchestra at the age of 17 and has since appeared regularly as both a soloist and a chamber musician on stages across Europe.
In recent years she has performed with orchestras including the Helsinki Philharmonic, the Lapland Chamber Orchestra, Sinfonia Lahti, Camerata Salzburg, Folkwang Kammerorchester Essen and Tapiola Sinfonietta. And in 2013 she premiered the viola concerto of Lauri Kilpiö with Jyväskylä Sinfonia.
Early 2019 saw the Alba Records publication of Pehr Henrik Nordgren’s Concerto for viola, double bass and chamber orchestra. Under the baton of Juha Kangas and alongside bassist Olivier Thiery and the Ostrobothnian Chamber Orchestra; this CD premier received excellent reviews.
Lilli was a member of the acclaimed quartet-lab with cellist Pieter Wispelwey, violinists Patricia Kopatchinskaja and Pekka Kuusisto. Now based in Amsterdam, she currently divides her time between her teaching post at the Sibelius Academy and international music festivals such as West Cork, IMS Prussia Cove, Resonances, Peasmarsh and Delft Festival. Highlights of the forthcoming season include Lilli recording the Vasks viola concerto with the Tallinn Chamber Orchestra under Juha Kangas.
Alongside the Jean Baptiste Vuillaume viola, on loan by kind permission of the Finnish Cultural Foundation, Lilli Maijala also performs on baroque viola. 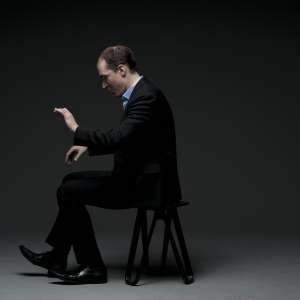 Swiss-born American pianist Gilles Vonsattel is the recipient of an Avery Fisher Career Grant and the Andrew Wolf Chamber Music Award, and winner of the Naumburg and Geneva competitions.

Deeply committed to the performance of contemporary music, he has premiered numerous works both in the United States and Europe and worked closely with notable composers such as Jörg Widmann, Heinz Holliger, Anthony Cheung, and George Benjamin.

Recent and upcoming projects include appearances with the Chicago Symphony (Bernstein’s Age of Anxiety), Gothenburg Symphony (Messiaen’s Turangalîla Symphonie), Orchestra della Svizzera Italiana (Berg’s Kammerkonzert),Mozart concerti with the Vancouver Symphony and Florida Orchestra, as well as multiple appearances with the Chamber Music Society of Lincoln Center. In the summer of 2018, he appeared in solo and chamber music performance at twelve major international festivals, including Schwetzingen Festspiele and the Santa Fe Chamber Music Festival.

Mr. Vonsattel received his bachelor’s degree in political science and economics from Columbia University and his master’s degree from The Juilliard School.

Hailing from Germany, Greece and the UK, Trio Gaspard is one of the most sought-after piano trios of its generation. Praised for their unique and fresh approach to the score, they regularly perform at major international concert halls, such as Wigmore Hall and Berlin Philharmonie as well as making appearances at festivals all over the world.

Recent highlights include performing the Beethoven triple concerto in Switzerland under the baton of Gabor Takács-Nagy, a recital in Berlin’s new ‘Pierre Boulez’ Hall and the performance of Bernd Alois Zimmerman’s  ‘Présence- Ballet Blanc’ for piano trio and speaker, with contemporary dancer Luka Fritsch, soon to be released on the Trio’s ‘Live in Berlin’ CD, in cooperation with German Radio. Trio Gaspard also works regularly with contemporary composers, including a commission from Irish composer Gareth Williams. 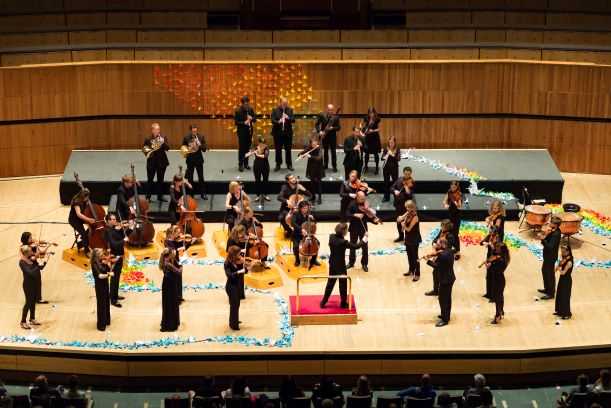 Collaborating widely across art forms and musical genres, Aurora has worked with an exceptional breadth of artists, ranging from Patricia Kopatchinskaja, Sarah Connolly, and Pierre-Laurent Aimard to Wayne McGregor, Edmund de Waal, and Björk. A champion of new music, it has premiered works by composers including Julian Anderson, Benedict Mason, Anna Meredith, Nico Muhly and Judith Weir. In recent years, it has pioneered memorised performance (without the use of printed sheet music), and is thought to be the first orchestra worldwide to perform whole symphonies in this way.

By challenging expectations of what an orchestra can and should do on the concert platform, Aurora inspries audiences of all ages and backgrounds to develop a passion for orchestral music. Through an award-winning Creative Learning programme, Aurora regularly offers creative workshops and storytelling concerts for families, schools and young people (including children with special educational needs and disabilities). 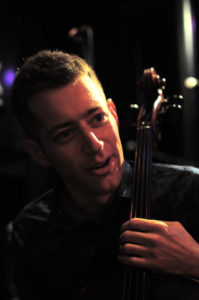 Sam Glazer is a composer, cellist and creative leader. He is co-creator of Spitalfields Music’s RPS-shortlisted Musical Rumpus, making operas for babies and toddlers, touring London, nationally and internationally (2012-2017). His choral score for circa’s Depart (LIFT/ Spitalfields Music/ Hull UK City of Culture 2017/ LeftCoast/ Brighton Festival) premiered in an East London Victorian woodland cemetery, and toured the UK in 2017. In 2018 he was commissioned by the Peasmarsh Chamber Music Festival to compose a new song cycle for children’s voices and string quartet, inspired by the commedia dell’arte. His latest commission, for Den Jyske Oper, was Hjerte Lyd, a new opera for babies and toddlers, which is touring
Denmark in 2019.

Sam has led projects for The Sixteen, the Royal Philharmonic Orchestra and Sinfonia Viva and developed creative learning programmes for the Peasmarsh Chamber Music Festival, the
Winchester Chamber Music Festival and the Mid-Wales Music Trust. He has devised and
presented schools concerts for the Britten Sinfonia, Sinfonia Cymru and the Royal Welsh
College of Music and Drama. Sam has been involved for over ten years with Wigmore Hall’s
pioneering Music for Life project, working in care homes with people with dementia, and
subsequently went on to co-found Raise Your Voice Opera, Glyndebourne’s group for people
with dementia and their carers living in the community. Since 2005 he has been teaching at
the Royal Academy of Music, mentoring young musicians who are studying Music in the
Community, and he is currently lead mentor for Spitalfields Music’s Trainee Music Leader
programme. Sam plays and sings with the groundbreaking band Firefly Burning, who released
their latest album Breathe Shallow in May 2019 with support from the PRSF and Snape Maltings.